A downloadable game for Windows and macOS

You've traveled far through the land to get to this place. The forest it was located in was nice, safe and quiet. That was really surprising, especially if you consider for a while that all the locals warned you against trying to explore this tower. Apparently nobody ever returned from this dungeon, so this seems like an appropriate challenge for someone like you!

Elevator of Doom is a small action RPG game.

Its whole sprawling world is a mind-blowing total of one room - an elevator going through the mysterious tower in the woods. Each floor the elevator will stop at features some kind of an event - maybe some monsters will assault you, maybe a shopkeeper or some npc's will enter the elevator... or maybe nothing happens at all. Can you survive being trapped in this hostile environment? Can you escape the Elevator of Doom?

Right now the game is in a very alpha state - there isn't really any visual polish, there are no sounds whatsoever and the events are really limited to a select few. So it's not a very interesting game to experience, but I wanted to get it out in time for the game jam in whatever state it was, as long as it was actually playable.

I have to admit that this is because of pretty bad planning on my part - I found out about and joined the #1roomRPG about a week after it started, and I was completely rusty with making games in Unity after a few years of a break, so making everything took me much longer than I thought.

Nevertheless, I had fun making this and I want to make it better.

Now that the game jam submissions are over, I can relax a bit and start adding new features to it. First up is adding more events, because if has to have actually a pretty decent amount of them in order to be much more interesting.

I like this game, but I've decided that the additional developement will carry on with another name (Elevator of Doom is pretty generic unfortunately - good enough for a gamejam, but not really for something more). Here's some after release thoughts on it I had written up. 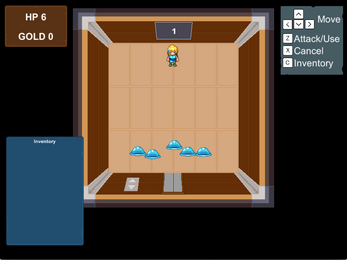